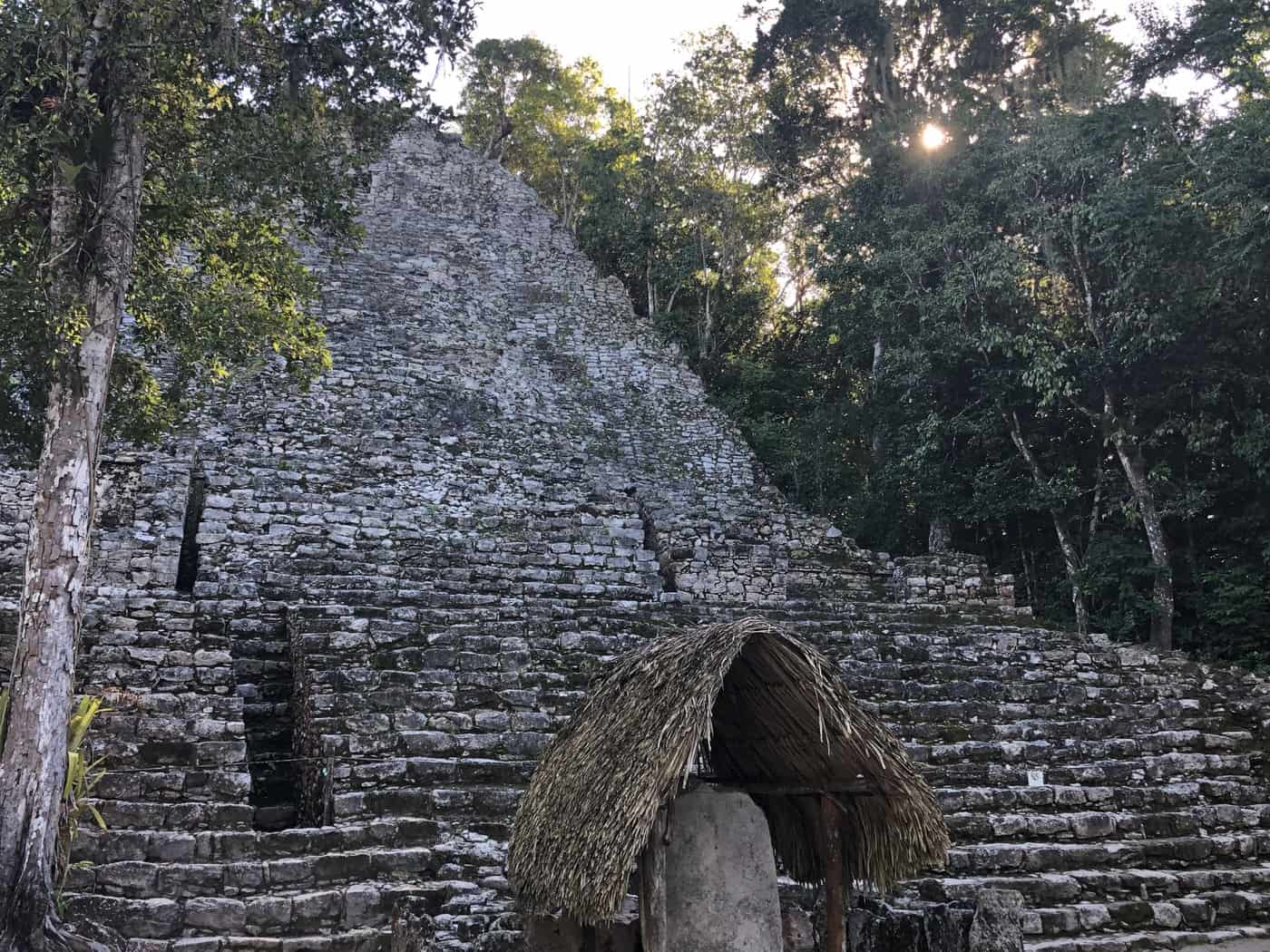 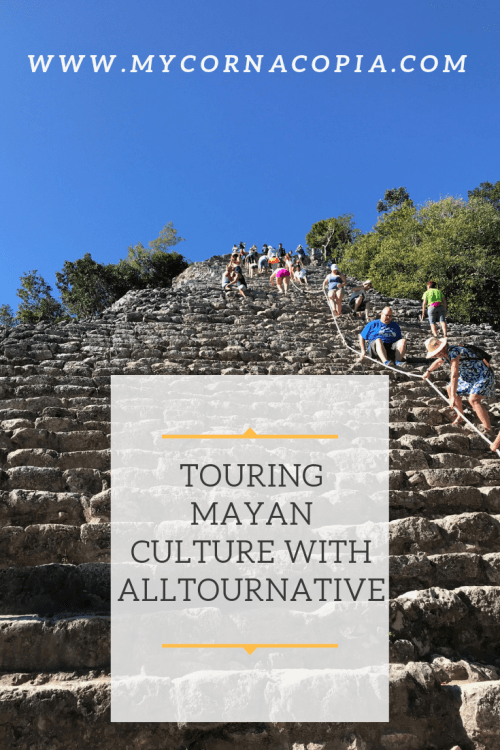 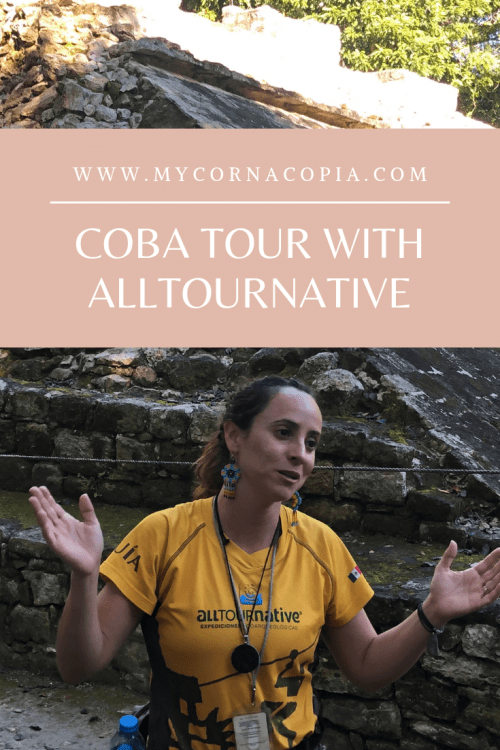 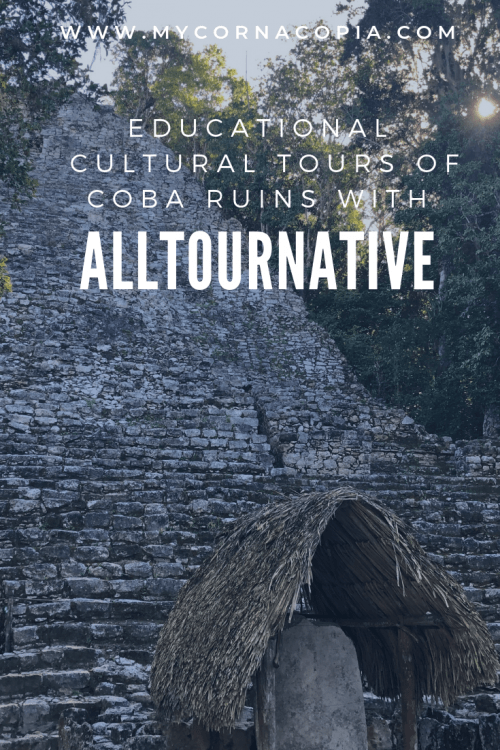 Disclosure: I was provided with a complimentary tour from Alltournative. All opinions are my own.

Traveling for me is more than visiting a new place and relaxing by the pool. Don’t get me wrong – I really like hanging to hang out by the pool with friends and enjoy a couple of drinks while on vacation. What I also enjoy though is getting away from the hotel or resort where I’m staying and learn more about the local community that I’m visiting. While out of the country the best way to do that is on a tour. I was really excited to be able to take an adventure tour in Mexico when I went out with Alltournative!

A Mexican based tour group that offers a true cultural experience, Alltournative is committed to saving the natural beauty of Mexico and is very much into sustainability, which is great.

They have a gold level certification from EarthCheck letting you know that when you take an Alltournative tour, you’ll be providing minimal damage to your surroundings.

Since Alltournative is a sustainable tour company, you’re not permitted to wear sunscreen or bug spray that isn’t designated as bio-degradable or friendly to coral reefs. I’d suggest an all-natural sunscreen brand such as Black Girl Sunscreen or Alba Botanical and a bug spray like Buzz Away. The reason you have to wear all-natural sunblock and bug repellant is because you’ll be going to getting into bodies of water, which products with additives can contaminate. Be sure to put your sunscreen and bug spray on before you get on the tour bus as well – you’re not allowed to apply them while you’re in on the tour for the same reasons. If you think you’ll need a snack, bring that too because you won’t be enjoying your meal until the end of the tour.

Wear comfortable shoes and a bathing suit under your clothes. Bring a towel, a water bag for your phone, a small backpack and a hat if you need it. Water will be provided for you but you can bring a reusable water bottle if you’d like. You’ll also be visiting a few places where you can purchase souvenirs so bring some cash as well (they take some credit cards as well).

My group went on the Coba Mayan Encounter tour which took us to the ancient city of Coba, to Mayan jungles where we learned more about the culture and received a blessing from a Mayan priest, kayaking, ziplining, rappelling, swimming in a sinkhole and at the end enjoying a Mayan lunch prepared by women of the community. Alltournative’s van picked us up at our hotel so we didn’t have to figure out how to get anywhere, which made it even easier and more relaxing. It was quite an adventure!

Our first stop was visiting the ruins of Coba. Home of Nohoch Mul, one of the tallest pyramids in the Yucatán peninsula, there are also other ruins to explore on the large site. Our tour guide, Rebecca, was excellent in her knowledge about the area. We found out that only about 1% of the Mayan ruins have been found – the rest have been consumed by the foliage of the jungle. 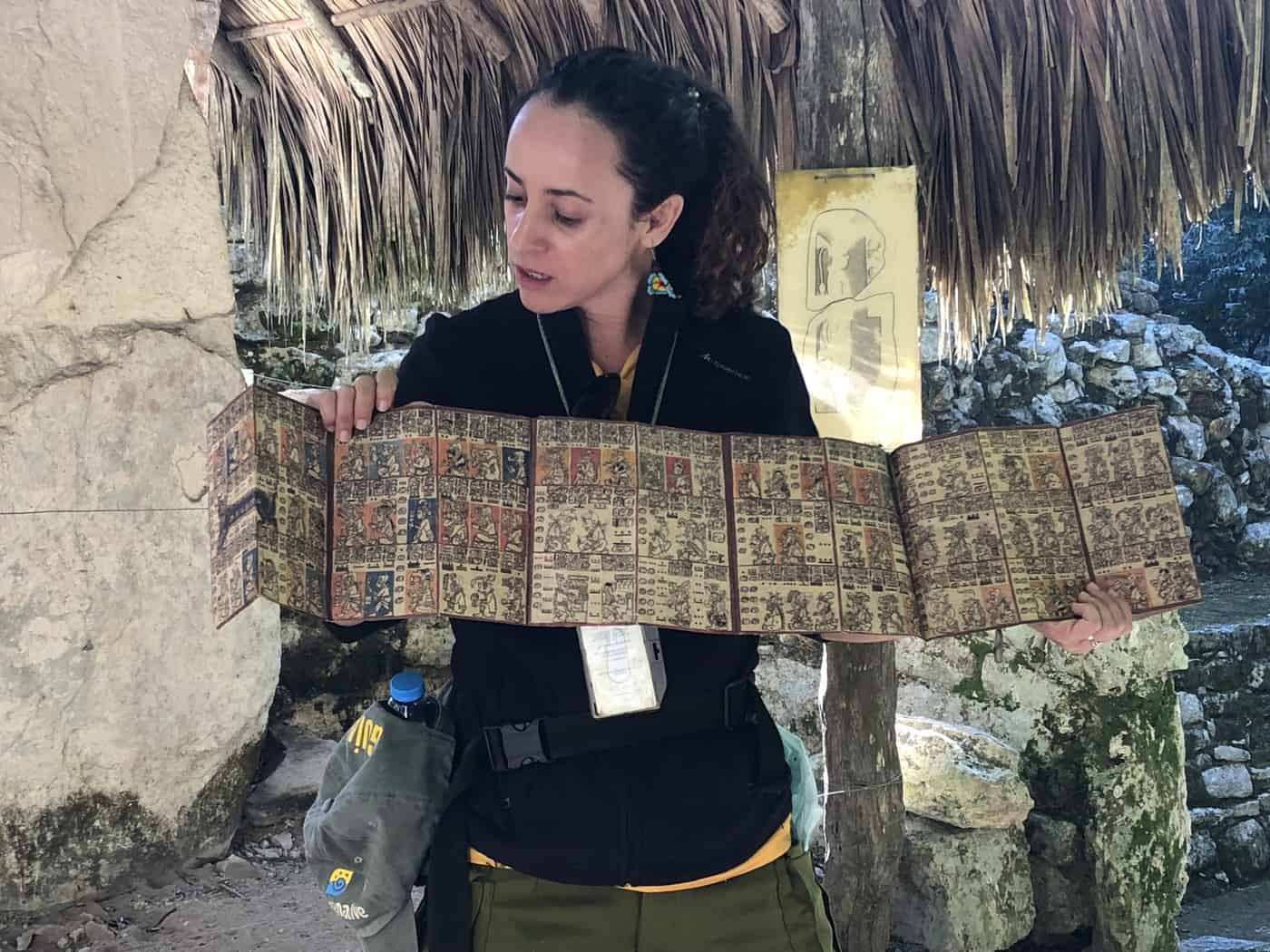 All the rocks of the ruins had to be brought in by hand. Jaguars are the largest animal in the jungles so humans had to move them all. Looking at the stones even on the smallest ruins, it’s amazing that these structures were even completed that way. Rebecca educated us on the religious aspects of the ruins, small markings on the ruins and the traditions of the ancient people who resided there. 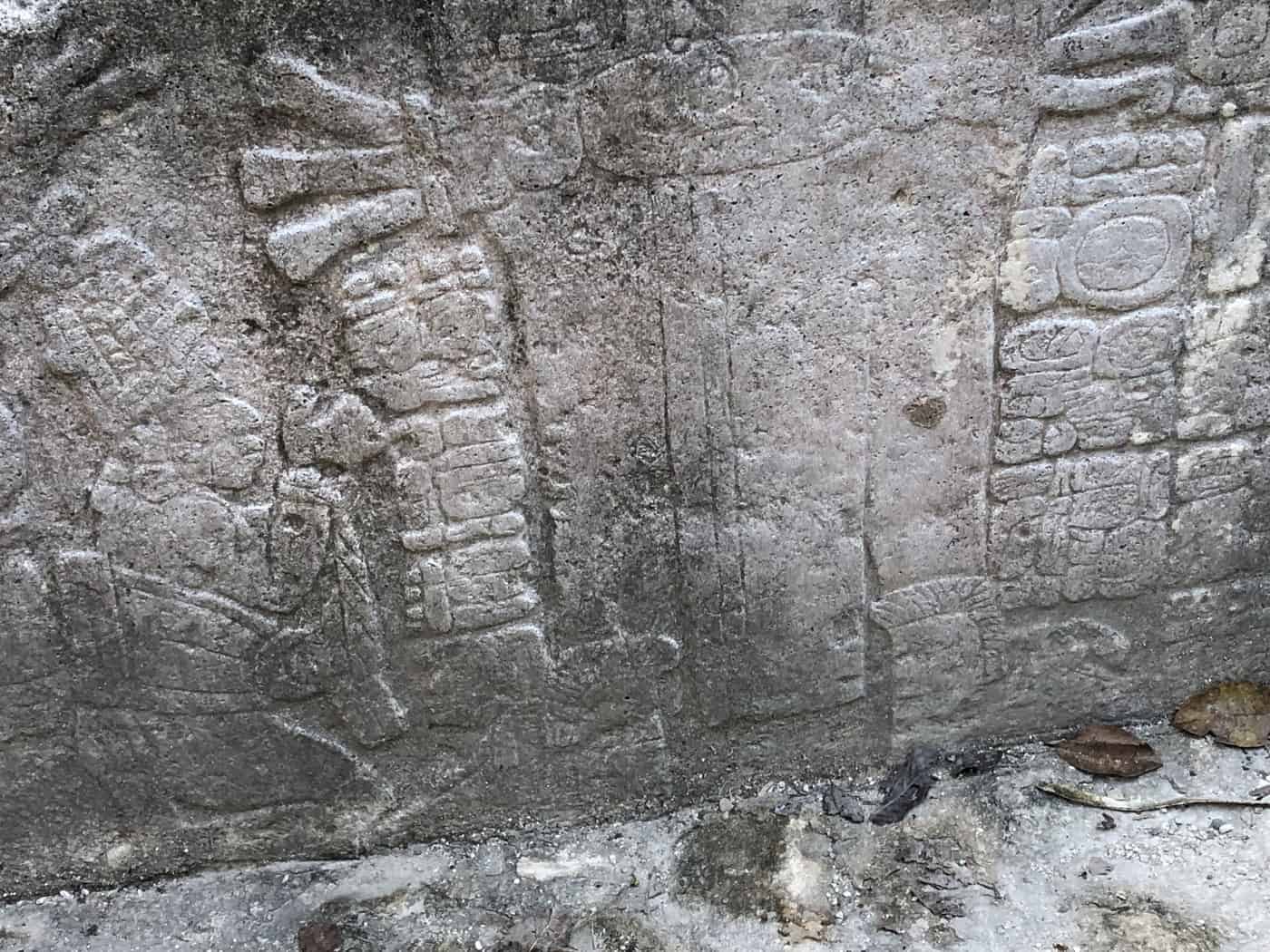 Once we got some background we were let go to make our way to Nohoch Mul. At around 140 feet tall and with 128 steps to the top, it was a sight to see. Unlike the more famous pyramid at Chichen Itza, the one at Coba is still allowed to be climbed. The climb isn’t for the faint of heart – it seems as if the climb is almost straight up and the rocks are weathered and uneven. 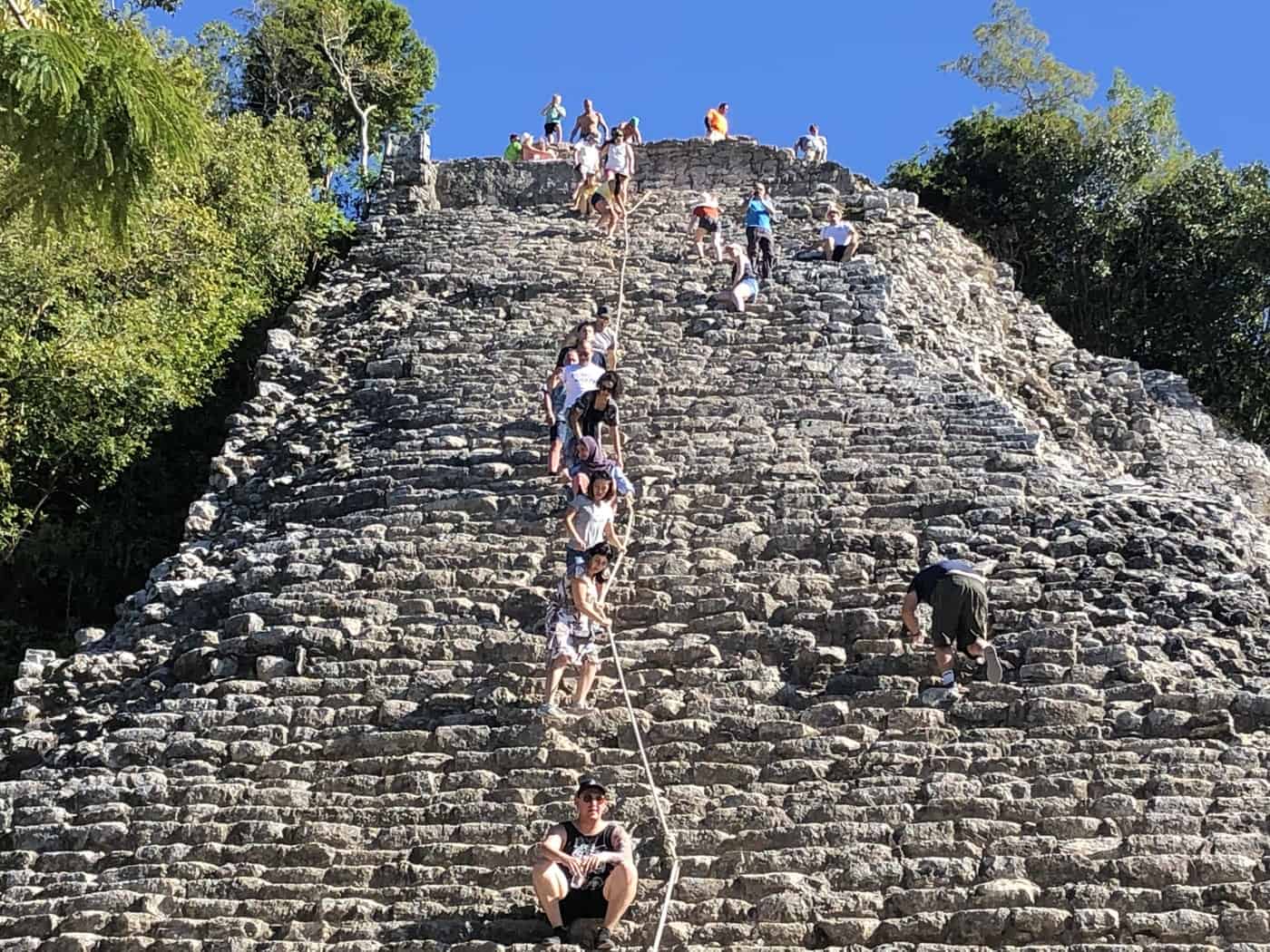 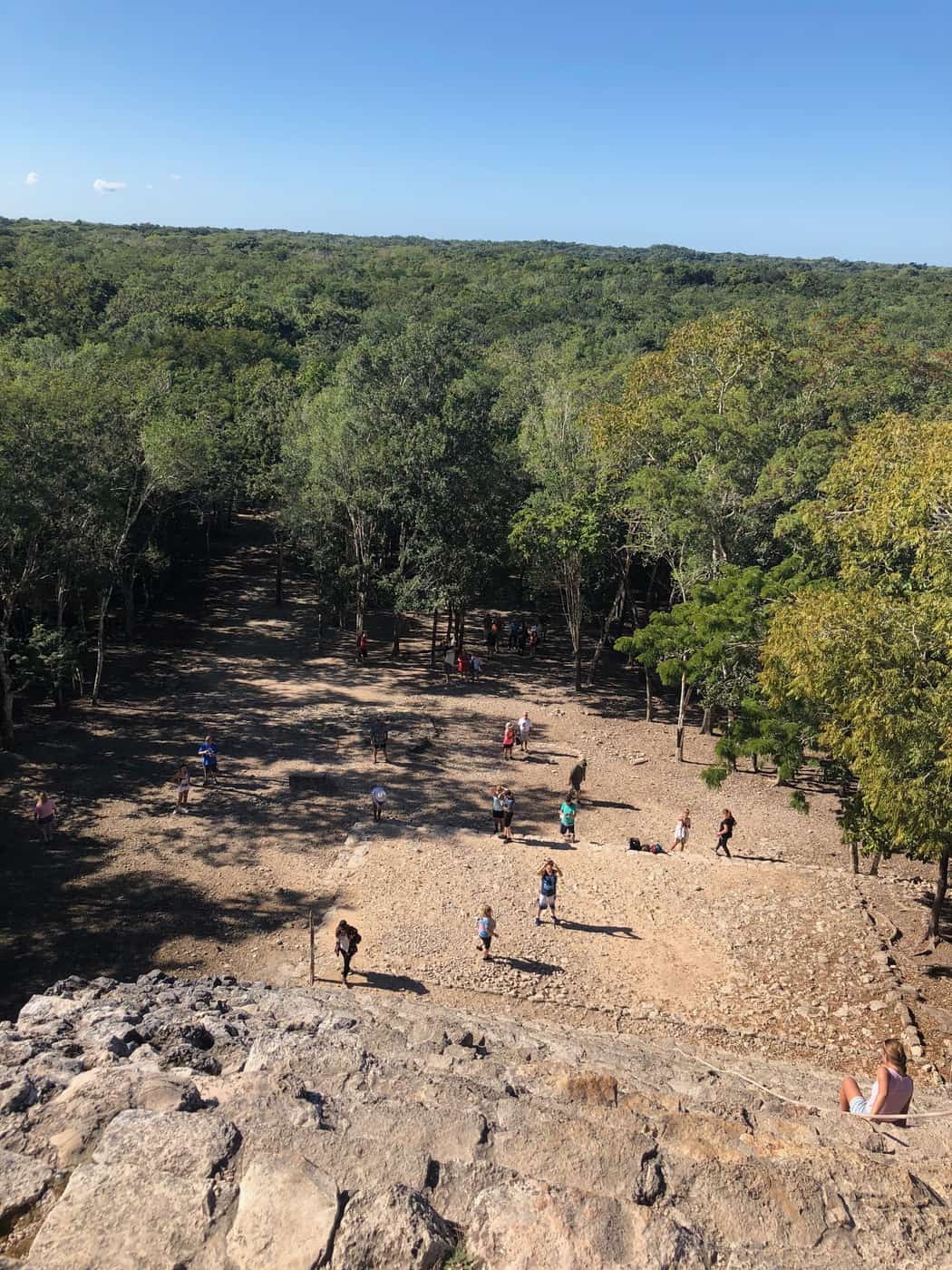 There are three ways to make it to Nohoch Mul from the front of the ruins: you can walk, rent a bicycle or pay to have someone ride you in a bicycle rickshaw. The path is a little bumpy so if you’re not a comfortable bike rider, get one of the men there to give you a lift. I wouldn’t recommend walking – it’s quite the hike and after the climb up it would be a lot to walk back.

Another great thing about going with Alltournative: they make Coba the first stop on the tour so that you get there early enough to beat the crowds. As we rode our bikes back to the entrance to meet Rebecca, there were swarms of people coming towards us which would make trying to climb the pyramid even more difficult.

Once you’re back at the entrance you have an opportunity to use the restrooms at the shops (they were clean and had toilet paper, but no toilet seats and throw your toilet paper in the trash bin) and also explore the shops themselves. I didn’t find a lot of things that seemed handmade, but the shop owners will bargain with you. 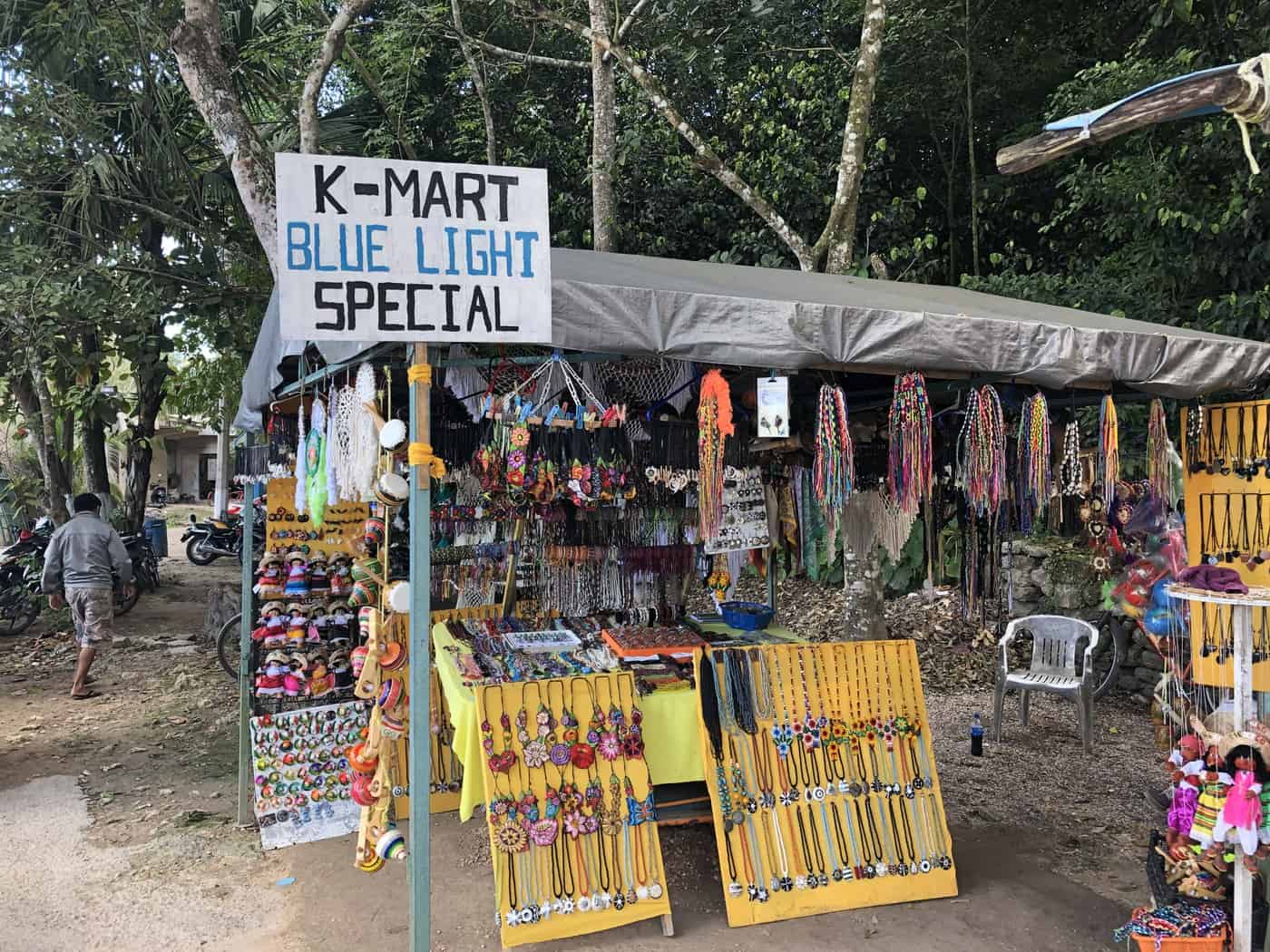 After a short van ride, we made it to the jungle area where we had to kayak from the parking area to the jungles we’d be hiking in. Rebecca told us that there were crocodiles in the water, but I’m not sure if she was pulling our leg or not. Erroring on the side of caution, I made sure to keep my fingers inside the kayak. It was a short trip but a beautiful way to see the landscape.

After our short hike towards the top of the mountain, Rebecca introduced us to Humberto, who is a Mayan ah-men, or religious man. Humberto didn’t speak English but Rebecca told us about his history and the blessing he would bestow up us. Out of respect, we weren’t allowed to take photos while Humberto was giving the blessing, but it was very moving and you could feel him welcoming us to his and his ancestors’ home.

Another interesting aspect of the tour was getting to swim in a cenote, which is an underground sinkhole filled with water. All the water in the cenote comes from rain and is part of the Mexican aquifer. Because of that, we were required to rinse our bodies and hair completely off before going down. 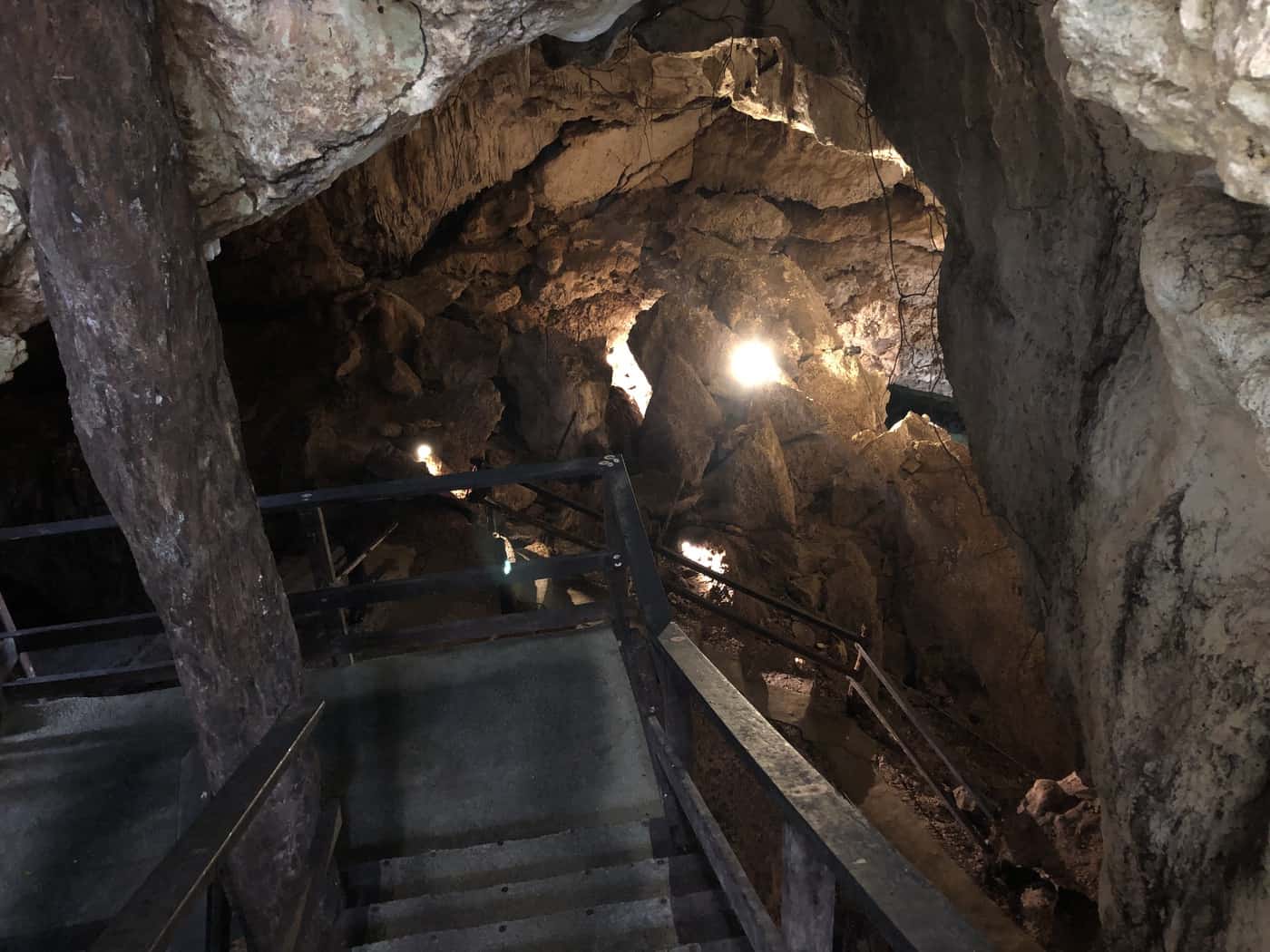 After we got out Rebecca told us that there were animals in the water, but we didn’t see anything since our noise probably scared them off. As we walked up we saw a lot of bats in the ceiling but they weren’t that interested in us.

Part of the tour included ziplining and repelling into an empty cenote. Two things I had never done before and was really scared about doing. The first zipline took us from the area where we had met Humberto and gotten the blessing back over the water where we kayaked from the parking lot. The same water that Rebecca had said had crocodiles! All I could think of was the scene from the Disney movie Peter Pan where the crocs tried to bite Captain Hook’s behind. I won’t lie – I was petrified. But the system seemed very safe and had two safety hooks. And I let almost everyone else go before I did, just in case. Once I went through, it was amazing, like flying through the air. So by the time we got to another location and had the opportunity to zipline again, I was all for it.

Another thing I had never done was to rappel. Hooked onto a levy system you walk your way down the wall of a cliff into the bottom of the empty cenote. Again, I was petrified. But there were two people at the bottom controlling the ropes so after taking a literal leap of faith, I made my way down. And again loved it.

Surprisingly these parts of the tour, along with meeting Humberto, were my most favorite parts just because I was able to conquer my fears and have a great time.

The end of our tour took us to a small village where Maya women had prepared lunch for us. Part of Alltournative’s goal is to include the local people in the tours, photography and meals which gives you an opportunity to meet the people and learn from them. Our meal included chicken, corn, black beans, hand made tortillas, squashes and other delicious items. It was the perfect way to end the tour, fill up after a day of adventure and get to enjoy the company of our tour mates. 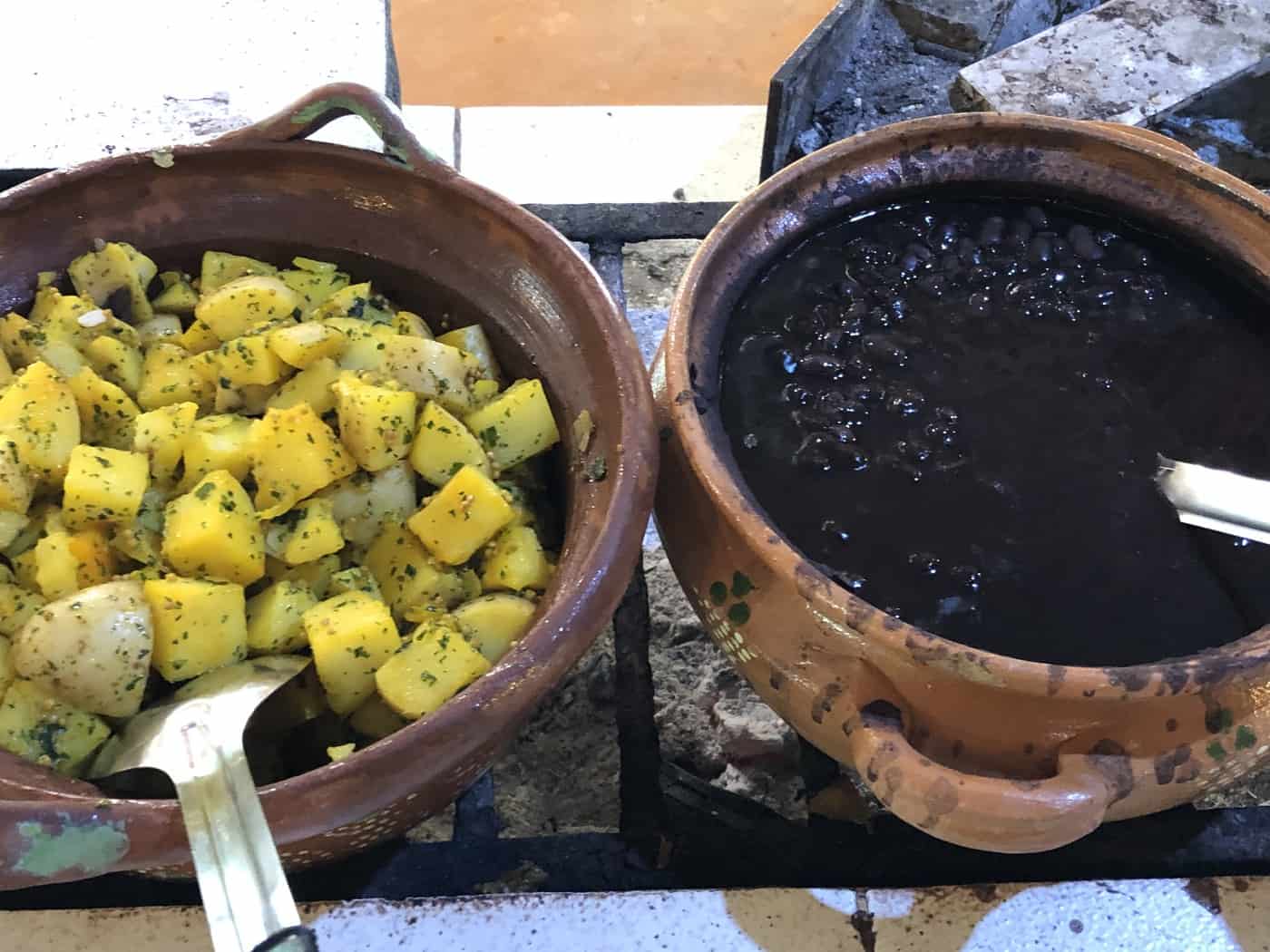 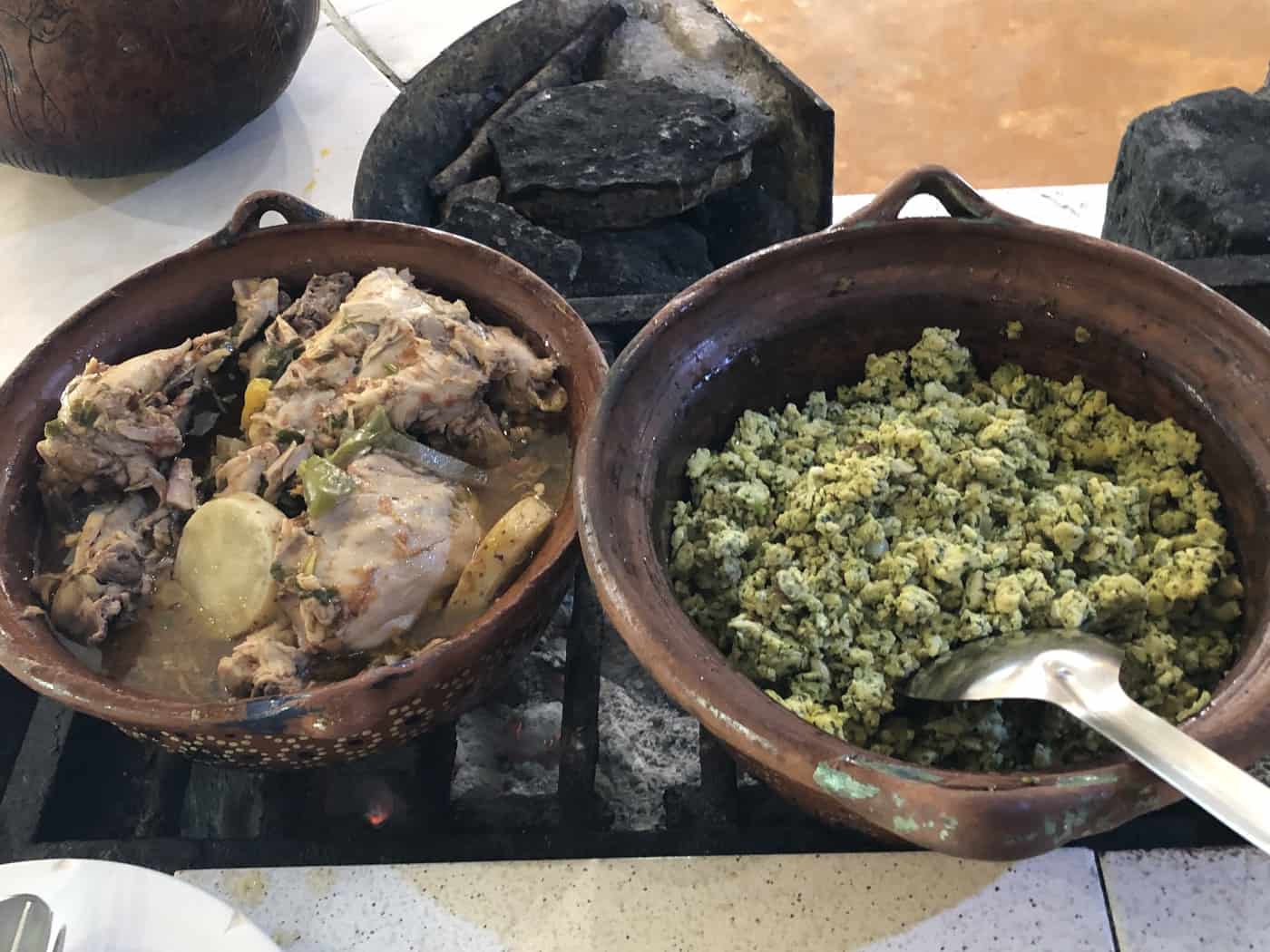 There was also a small shop a the village where you could purchase things made out of the local resources. One thing I loved was seeing old helmets like the ones we had worn for ziplining and rappelling that had been made into planters. What a great way to be resourceful with unusable products and to help with sustainability! 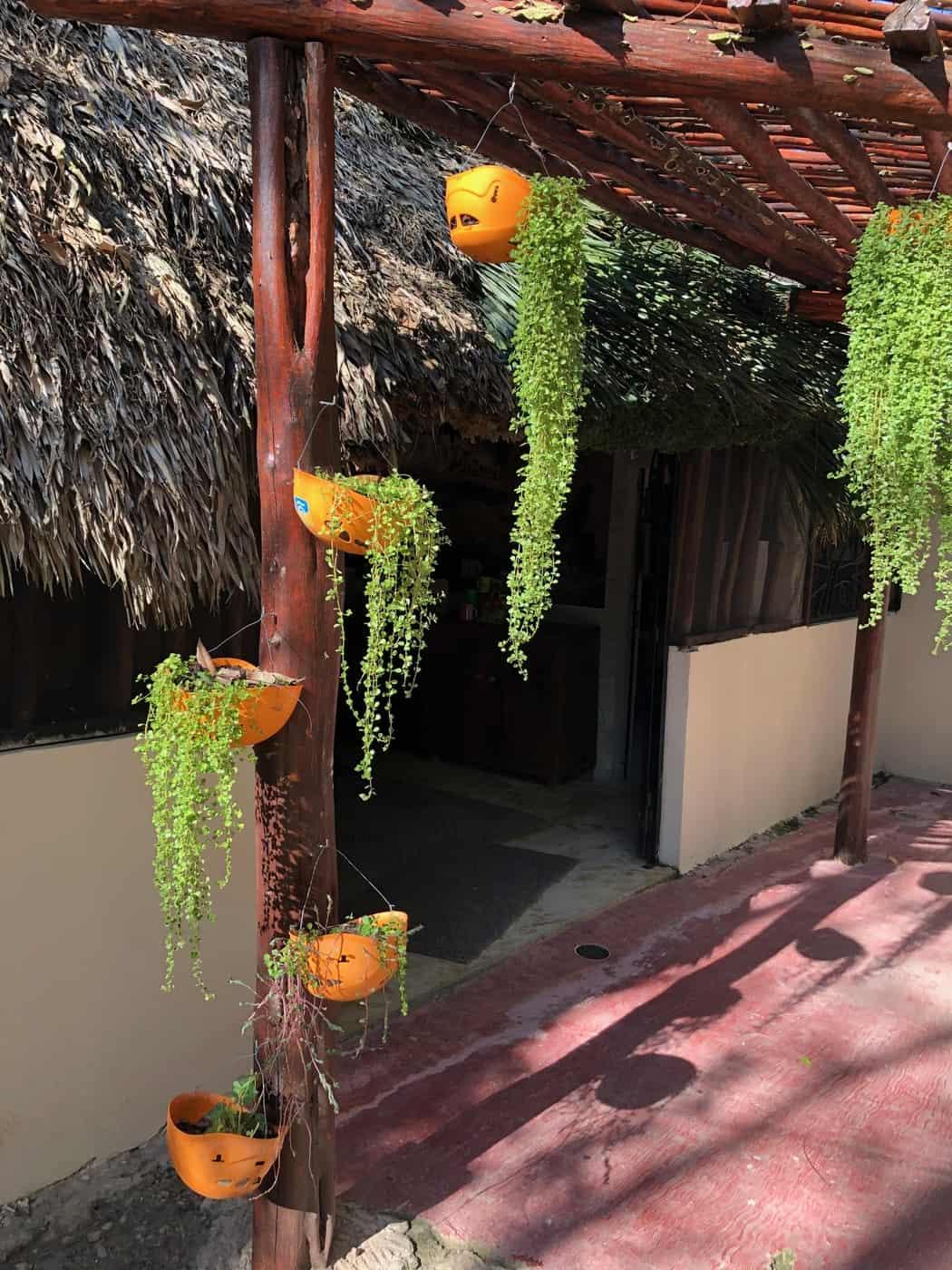 Taking the Coban Mayan Encounter tour with Alltournative was one of the highlights of my trip to Mexico. Meeting the ah-man and receiving a blessing, seeing the ancient structures that were built by hand, hiking through the mountains and enjoying the modern Mayan community’s hospitality helped me to understand more about the country I was visiting. I’d recommend this tour to anyone visiting the Riviera Maya of Mexico. 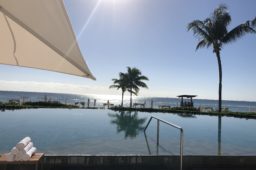 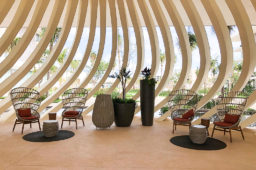 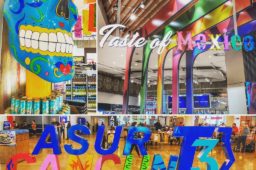 Travel Mastermind to the Riviera Maya